One of the key productivity hacks is to stay away from toxicity at work. Toxic behaviour at work can kill productivity as well as your career growth.

So, it is extremely crucial not to fall into the toxicity trap at your workplace.

But, how to identify toxic behaviour at your workplace?

Or how to be sure you are not being toxic inadvertently as that can halt your career growth.

We have listed in this article 7 key behaviour at the workplace which can be termed toxic.

Let’s get started with the first productivity draining activity now. 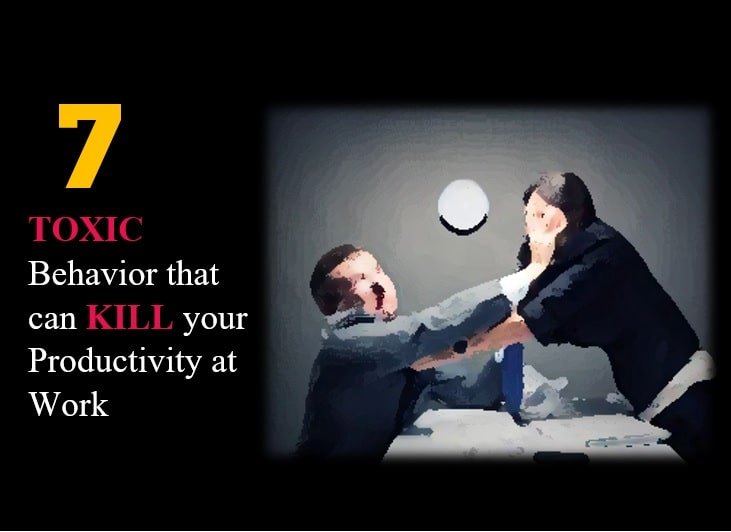 Procrastination is a habit that can take a toll of your career.

It’s important to plan and prepare. However, a lot of people like procrastination.

Procrastination, or in layman’s term, postponing a planned work for later can have a multi-level impact on productivity at the workplace.

If you are in the company of procrastinators at work, beware, as this is an extremely contagious toxic behaviour.

This toxic habit at work can kill your productivity irreparably.

So, stop procrastinating and start working.

Here are some tips to avoid procrastinating at work:

The term given by Lifehack blog is excellent. They are creative in finding excuses for missing work or not working properly.

These people are so creative that they are born with excuses.

They have a list of reasons on why they are doing their best but it would be better if someone else does it.

Some of the common and creative excuses at work are:

These creative monsters can never fall short of excuses.

Avoid these people and this habit of making excuses as this increases toxicity at work and impairs productivity.

Own up your responsibilities and be upfront with issues and solutions. Will help your long term career for sure.

Engaging in group making and office politics are a classic example of toxic behaviour at work.

It is important to remember that in an organisation every team member is attached by a common goal.

Creating differences by using various opinions to one’s advantage can derail a firm from its targets.

Office politics leads to polarisation and influence of a few. This can be damaging to the work environment and collaborative culture at work.

Those involved in office politics do it for their personal gains and not for the larger interest of the company.

Thus, it is advisable not to engage directly or indirectly in any form of office politics.

Gossips are best served in daily soaps and neighbourhood parties.

However, a lot of offices have become a breeding ground of gossips.

This can seem to be fun at the start but with time it increases negativity within the workplace environment.

Try to refrain for gossiping while at work.

You certainly don’t want to be the one whose best skills at work is gossiping.

Being compassionate is one of the top traits of excellent team players.

Bullying others can be extremely toxic for the overall productivity of your workplace.

This can seriously impede your career growth in the long run.

Intimidating others for petty gains like ‘the employee of the month’ or some other perks in even more dangerous.

A short cut to success by intimidation can lead to serious issues in the long run. Once you are out of favour or face serious backlash for bullying, this toxic behaviour can boomerang.

It is important to maintain a safe distance with the bullies of the office. They make the environment at work extremely heavy and negative.

You are bound to both successes and failure at work.

While a lot of team members hog the limelight even at a small success, they prefer shifting the blame on others at failures.

A leader is one who leads from the front. She would not shy away from taking a success or failure in strides. A common trait of leader or a great team player is that he would never blame others.

Blaming others for any failure speaks loud about the character of the person and leave a lasting impression on others.

So if you met your target in time well done, if you missed it by a whisker own it up. You boss would appreciate it. Don’t blame others, your health, your family or something else for the same. Rather make a promise to work harder and better next time. It will leave a much better impression on others and will serve your career better.

7. Being the boss’s bitch (pun intended)

A lot of people can do anything to get promoted quickly.

They can heap praises for their bosses, act as a part-time butler or a shopping companion to the boss’s spouse.

These people can become a driver when the boss has a few extra drinks as an office party.

They are more like personal assistants to their boss’s family more than a staff of the company.

Beware of these people as they are also the biggest gossipers around you. They make the environment so toxic that it only suits them and only they appear to gain limelight.

They appear every time when they see managers around in order to hog the limelight.

They are like Boss’s bitch (not literally- of course :)). They go around making the boss happy and are a classic mixture of all the above points.

From being a classic procrastinator to an expert in office politics, they win the trophy of being most toxic and venomous at work.

So, avoid them at all cost. They do usually fall out of favour soon.

The above examples about toxic behaviour at work are just a few of the many ways a few people spread negativity at work.

These hurt the career prospects of all involved. And toxicity can never help in your success pursuit. Positive and productivity certainly can.