To stay ahead of the competition, we need to keep innovating regularly.

This at times may be draining to get the creative juices flowing regularly from within. In this post, we have outlined a few mantras by creative people that will provide the required boost to the morale to keep up the pace for workplace innovation.

The key motto of this post is to stress on the point that how the creative urge from within motivates a person to reach unexpected dimensions of knowledge and inventions.

As a famous saying of Steve Jobs (Co-founder of Apple) mentions:

“We are here to put a dent in the universe. Otherwise, why else even be here?”

Everyone needs some kind of motivation to keep going.

Well, who hasn’t been in this situation?

In this post, we have tried to compile a few of the best innovation quotes for career success.

These innovation quotes help us draw lessons from seven mentioned great innovators from different trades and with different personalities.

The intent is to help readers energize themselves and their careers through these innovation and success mantra.

Also, creativity, innovation and leadership are not domain-specific, and these traits are achievable by anyone making serious efforts. However, the feat is not an easy one to achieve.

Let’s try to ride on the shoulders of giants to locate our success path. Let’s get started with some of the most inspiring innovation quotes to help you achieve huge success in career. 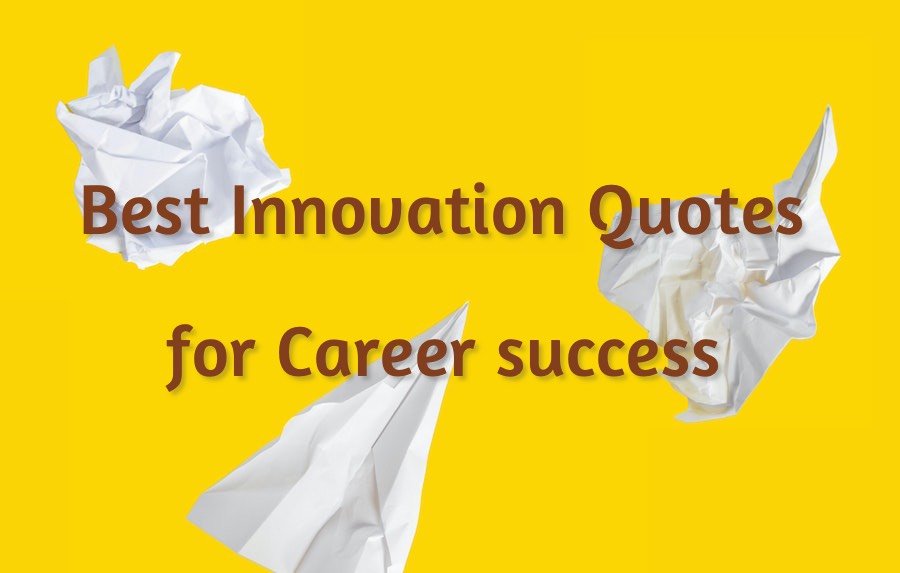 Let’s start with Steve Jobs who is considered to be one of the most visionary business leaders to have lived ever on this planet.

We all know him for what he did to the computer and smartphone industry. iPhone the Invention of the year 2007, credited to be one of the most popular workplace innovation and of all times, is his brainchild.

However, several readers may have been unaware of the fact that Steve Jobs was a University dropout, who later became an icon of creativity.

His famous quote will keep reverberating within the business fraternity for years to come.

He was an innovator par excellence and lived to innovate.

He redefined the perception of the common people globally on how mobile phones can be used and was one of the biggest influencers of this century.

One of Steve Jobs success quote that everyone can relate to at workplace, to be creative, competitive and innovative, is:

“My mantras are focus and simplicity. Simple can be harder than complex; you have to work hard to get your thinking clean to make it simple.” – Steve Jobs

The world-famous great artist Leonardo Da Vinci is considered to be one of the most talented persons to have ever lived on this planet.

It was difficult to find one mantra for workplace innovation from the great Leonardo da Vinci.

A million pages will not be enough to portray all his success stories.

However, these 10 inspirational quotes from him in the video would reflect upon his personality and his philosophies. Philosophies which were the building blocks of the creative capabilities of one of the greatest artists and innovators of all times.

One such quote about compassion and love can be related to the workplace.

‘Life without love is no life at all’

He also taught generations through his deeds that success lies in simplicity and one of his famous quotes can be linked effectively to today’s market place which is as follows:

“Learn how to see. Realize that everything connects to everything else.” – Leonardo Da Vinci

If we try to learn about innovation and have the intent, we will get countless examples from artists.

Martha Graham was a great dancer of the 20th century. Creativity fuelled her energy and she created a movement language based upon the intense expressive capacity that human beings possess.

She had an active career of 70 years and it is said that she came up with surprising creativity even when she was aged 80+.

As is said, creativity has no barriers. she pursued her raw, intuitive approach to movement and had no fear of appearing ugly onstage. It’s not for nothing that she’s been called the “Picasso of dance.”

Think of this quote in the context of the workplace.

It is still relevant if superimposed upon workplace innovation, it fits well for all strategists. It is the passion that drives all human beings to stay creative, innovative and competitive.

“Whether you think you can or you can’t; you are right”. – Henry Ford

This is a key lesson by Henry Ford that has gained in popularity over the years.

More and more organizations stress on self-belief and motivational theories to help the workforce become more and more creative.

Henry Ford is considered to be one of the biggest influencers globally in the automotive sector.

His popularity breached automotive industry and he is known to be one of the best strategists ever who championed lean philosophy.

His knack of keeping abreast with innovation in technology and changes in human behaviour made him a revolutionary industrialist who metamorphosed the automobile industry.

His innovation within the engineering and automobile sector was not only exemplary but also inspirational.

‘Barriers to workplace innovation are usually in the mind’. – Ratan Tata

Ratan Tata’s name has been synonymous with leadership for many years.

What separates him from his contemporary leaders is his determination to drive success through confidence and perseverance.

While this is a factor which is a prerequisite of entrepreneurship, championing it is another thing.

He started as a normal employee and made his way upwards in the organizational hierarchy.

He is said to be the most prolific Chairman of Tata group which now has an eminent presence globally in Iron and Steel, IT and Consulting.

Humility is a trait he always possessed and he has been looked at by his peers and others with immense respect.

Several management gurus yearned to work with him and incorporate his work ethics, style and demeanour.

He is also a statesman and an evangelist promoting innovation by investing in several innovative start-ups.  Famous Ratan Tata’s success quotes. inspire us towards great career success through continuous learning and innovation.

There is one thing that is common in all innovators- ‘they are different’.- Sir Richard Branson

“Business opportunities are like buses, there is always another one coming”.

Richard Branson was a unique innovator and his mantras of success were perseverance, desire, setting unachievable challenges and a continuous aim to fly high.

People who work with him believe in his charismatic leadership and make an effort to imitate him.

His prophesized route to success is an organic evolutionary path which embraces a lot of interconnected intangible things.

These come by experience, exposure and perseverance. One of our posts covers more on Branson and his famous mantras of success.

“Someone is sitting in the shade today because someone planted a tree a long time ago”.  – Warren Buffett

Now relate this to workplace innovation and career success.

Continuous learning is the key to innovation and success.

Warren Buffett is called the “Wizard of Omaha” or “Oracle of Omaha”, or the “Sage of Omaha” and it is said that he has taught America how to invest.

He is the biggest influencer in terms of investment all across the globe and has featured in Times’ list of most influential people.

He commands high regards globally for his adherence to value investing and his personal frugality.

Buffett always believed in shared wisdom as the quote suggests and he is an ardent supporter of long term investments; both in business and humankind.

We have more quotes by Warren Buffett in one of our other posts.

These seven exalted persons have remained icons of creativity and become legends of workplace innovation or more generally innovative excellence; some during their lifetime itself while few others posthumously.

However, the fire they have ignited will continue to energize the creative and innovative streaks of new entrants for millenniums to come.

Hope these innovation and success quotes would help you achieve greater success in your career.

Stay inspired and work hard and smart to achieve immense success in your career.

What is Entrepreneurship? Definition, Traits and the Meaning

5 Ways to Grow Your Business Remotely

Why Innovation Management is Crucial for Hospitality Businesses in 2020

Job Vs Self Employment | Decoding the Dilemma