India was overjoyed when there was news of the cheapest car in the world. A blend of Indian and Italian technology was ready to mesmerise the world. It was all possible because a man stood by his promise made to Indians. He made Tata Sons one of the biggest global brands. He is none other than the golden businessman of India, Ratan Tata. He is a legendary hotelier and a legendary businessman. We have included in this post some of the most famous quotes and mantras of success from Ratan Tata.

One of his most famous and inspiring quotes among many others is mentioned below:

“Barriers to innovation are usually in the mind, None can destroy iron, but its own rust can! Likewise, none can destroy a person but his/her own mindset can!”

Before we continue with other inspiring quotes from Ratan Tata, here’s a little more information about his background. 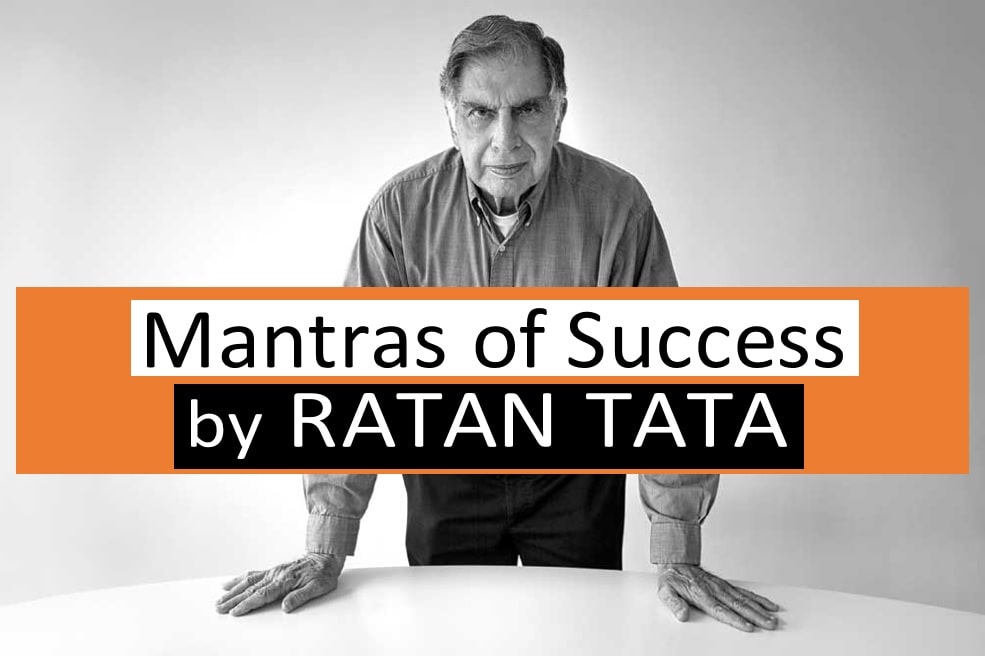 Ratan Naval Tata (born on 28 December 1937) is an Indian businessman and chairman Emeritus of Tata Sons.

He was the chairman of Tata Group, a Mumbai-based conglomerate from 1991–2012.

He voluntarily handed over the baton to his younger colleague after attaining the age of 75 years.

He is one of the most followed leaders of India.

Mantras of Success by Ratan Tata

Ratan Tata’s source of success lies within. Ratan Tata has unwavering faith in himself. One of his famous quotes says.

“I don’t believe in making the right decisions. I take decisions and then make them right,”

Ratan Tata’s name has been synonymous with leadership for many years and will continue to be so for years to come.

He started as a normal employee and made his way upwards. He took criticism in strides as is displayed by his famous quote for success.

Humility is a trait he always possessed and he has been looked at by his peers and others with immense respect.

Several management gurus yearned to work with him and incorporate his work ethics, style and demeanour.

One of his quotes on talent is extremely relevant to the hospitality industry.

“All of us do not have equal talent, yet all of us have an equal opportunity to develop our talent.” 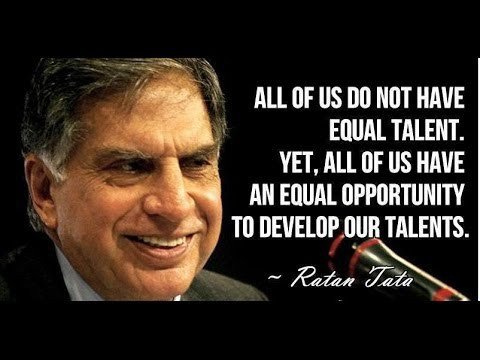 Even though Ratan Tata is a seasoned businessman, he is also a fervent collector of art and is passionate about innovations, cars and technology.

One of his famous quotes carry the emotions of hospitality and like various popular hospitality quotes, preaches inclusiveness.

He sporadically flies his plane as well and amazes people by the energy and aura he carries with him.

Ratan Tata was a known workaholic and even after retiring, he continues to impress young and energetic industry prodigies with his management and operational excellence.

He inspires everyone to deal with the crisis with heads high.

“Deal with Crisis in such a way that you can hold your head high and sleep well at night”.

Visionary leaders are those who build new prospects, and also, pave way for innovations.

He encouraged creativity within Tata Group and under his leadership, TATA became one of the most coveted brands of the world.

The below quote sums up the essence of what Ratan Tata has always preached.

“Apart from values and ethics which I have tried to live by, the legacy I would like to leave behind is a very simple one – that I have always stood up for what I consider to be the right thing, and I have tried to be as fair and equitable as I could be.”

Here you go. Some of the mantras of success from Ratan Tata.

The purpose statement of the Tata Group says:

“At the Tata Group, we are committed to improving the quality of life of the communities we serve”.

This is a big statement and more than TATA’s brand it reflects the personal brand of Ratan Tata.

Below is a video of Ratan Tata being awarded as one of the “Greatest Global living Indians” (Credits: NDTV)

Ratan Tata has been a common name in powerful people by Forbes due to his capabilities to innovate at will. It was under his visionary leadership that Tata group acquired Corus Steel and Jaguar Land Rover. Joint venture with Starbucks was another highlight of Ratan Tata as he made way for his successor Cyrus Mistry.

Ratan Tata is one of the few courageous people who went out of the way to explore the creative intellectual wealth they possessed and utilised the same constructively for themselves as well as for the betterment of society.