Which are the top hotels you would think of when visiting India? In this article, we have listed some of the top hospitality companies in India. The list predominantly contains the top hotel operators.

Let’s begin with a quick preface about the Indian Hotel industry.

None of the international hotel chains has been able to challenge the Taj Group of Hotels (The Indian Hotel Company Limited) over the past decades. However, after Marriott International attained Starwood Hotels & Resorts in 2016, it became the largest hotel operator in India with approximately 20,000 rooms or 11 per cent of the domestic market.

This means the Taj Group, which has been in first with its more than 14,000 rooms, slipped to second place in the list of largest hotel chains in India.

The biggest gainer through this clash of Titans is going to be the Indian hotel industry. 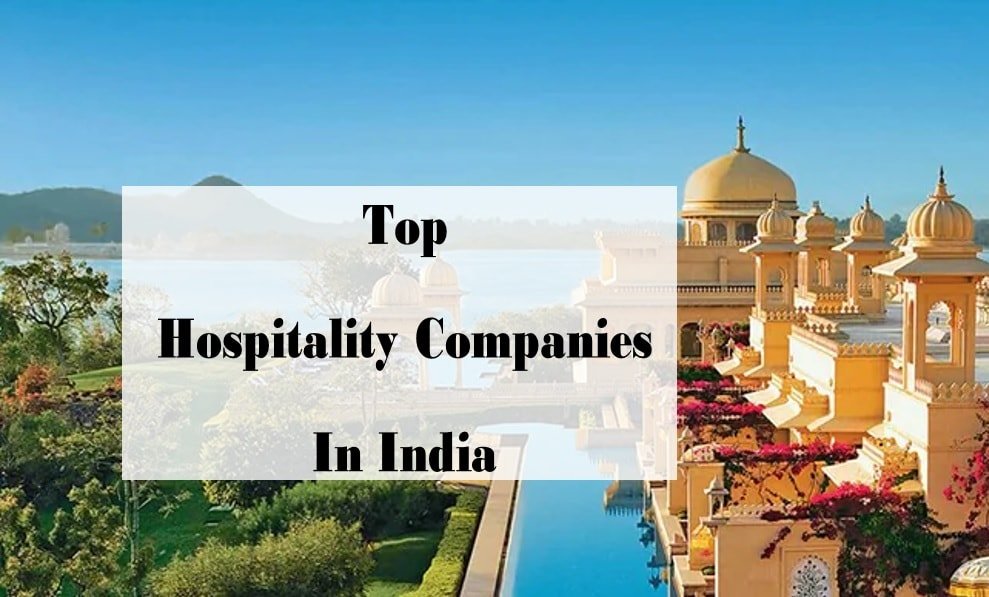 The Oberoi Group and ITC Hotels have been the key competitors of Taj Hotels over the years. Marriott’s quick journey to become the top hotel operator in India can thus be an indication of the changing landscape of the Indian Hotel industry.

Taj Group is an iconic Indian brand of hotels that has dominated the domestic market ever since its inception over a hundred years ago. With its own expansion plans, the Taj group is set to give a fight back.

Now that comes as a shock to The Indian Hotel Company limited which has a lot of catching up to do now.

Before the merger, the U.S.-based Marriott hotel brand was the fourth largest with Starwood being the fifth. 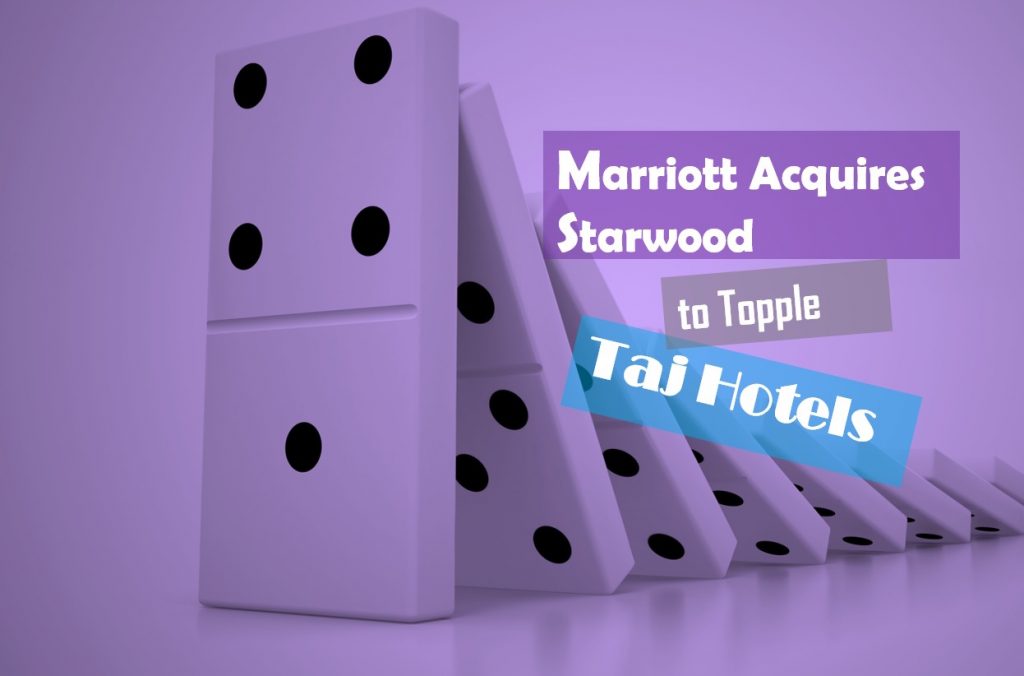 Marriott which is one of the largest hotel chains in the world, now has almost 30 unique brands in India such as the Ritz-Carlton of Starwood and the W of Marriott, which is being developed in Goa.

Have a look at the 118 properties of Marriott in India which is set to increase in the coming months.

The company has 30 brands around the world with more than 5,700 properties in more than 110 countries – brands that include: St. Regis, Bulgari Hotels & Resorts, Sheraton, Fairfield Inn, Westin, etc.

Under the flagship of reputed TATA brand, Taj Hotels have been synonymous to hospitality in India.

The hotel group has stayed as the most loved brand in India.

Indian Hotels Company Limited (IHCL) is the organization that owns the Taj Group of Hotels and Resorts or simply the “Taj Group” as it’s popularly called.

The Hotel group before the Marriott acquisition of Starwood held the coveted number one position in terms of the largest hotel operator in India for years.

Taj Hotel operates over 100 hotels in India and has expanded to the USA, UK, Maldives and other parts of the world.

There are a lot of hotel chains like Vivanta, Taj Exotica, Taj Safari among others in the Taj group flagship.

A lot of hotels of Taj like Udaipur Lake Palace and Taj Falaknuma Palace in Hyderabad have been in several global listing of top hotels.

Tajness as a concept of superior service has been introduced recently by Taj Group to ensure consistency in the level of service across all Taj Hotels.

As the group is now toppled from the numero uno of Hotel operators in India, the Taj Hotel group is expected to fight back.

Taj hotel still is the biggest Hotel brand in India but in terms of hotel rooms, they do have some catching up to do of sure.

Although this hotel group operates only 31 luxury properties in India and a handful more under the Trident brand, the hotel chain still is regarded as one of the best hospitality groups in India.

The hotel chain that was started in 1934 now employs over 13000 employees and also has a couple of cruise ships that it operates.

Biki Oberoi, as he is popularly known as, is the current chairman who is one of the legendary hoteliers of all time. He has been credited with making Oberoi the global luxury hospitality brand.

ITC Hotel is India’s third-largest hotel chain. This top and extremely prestigious hotel chain in India operates over 100 properties that include some of the finest 5-star luxury hotels.

Reports on Wikipedia confirms that ITC Hotels have been regularly ranked as one of the top-rated hospitality employers in Asia.

ITC Grand Chola was the first of its hotels that opened in Chennai in 1975. It is regarded as one of the best hotels in India.

ITC also has its sub-brands by the name of Fortune Hotels and Welcome Heritage Hotels operating various other top-quality properties and 4-star hotels in India.

If you would have a look at few of its properties like the ones in Bangalore, Goa and Mumbai, you would be amazed by the class and luxury these hotels oozes out.

“Leela Hotels” is a part of the Grand Hotel Alliance based in Geneva, Switzerland.

With just 9 palace properties, this hotel chain still makes a mark in the hotel industry of India and is an extremely reputed hospitality company.

Oyo Rooms can be said to a disruptor for the hospitality industry.

It is definitely the most talked-about hotel and travel startup in recent years.

Now let’s discuss a bit more about why it deserves to be in this list of top hospitality companies in India.

It is the fastest-growing hospitality company of leased and franchised hotel.

Oyo Rooms is the third-largest hotel chain in the world.

This hotel chain has grown to thousands of leased hotels within a span of 6 years.

Backed by a lot of investors, this Indian hotel & travel startup is now making its presence felt all across the globe.

“The Lalit Hotels” is another Indian hotel brand which aims to expand globally.

Lalit Hotel showed its presence in 1988 by opening a 5-star hotel in New Delhi.

The hotel chain has now grown at a rapid pace to become one of the best hospitality chains in India.

This hotel chain which has been founded by Mr Lalit Suri now has over a dozen great hotel properties to its name.

The hotel chain has announced that 2019 and 2020 would mark record growth of Hyatt Hotels in India with 14 more properties in the pipeline.

Hyatt Hotels don’t boast of a huge number of hotel properties but they have a name attached to them in terms of quality service and employee recognition. It has been regarded as one of the best hospitality industry workplaces.

Hyatt Hotels have both 5 star and 4-star properties in India to cater to business as well as leisure travellers.

Apart from these, there are various top hospitality companies that have a notable presence in India like Hilton, Accor Hotels, Carlson Group, Intercontinental Hotel Group and more.

We would also like to list some other notable Indian hospitality companies which have shown tremendous growth in the past few years. Some of the notable ones out of these are:

Indian Hotel industry is one of the most lucrative markets in the world. Almost all the top hotel chains are aiming to dominate this market.

Marriott has ensured a big momentum shift by leapfrogging Taj Hotels as the top hotel chain in India.

The aim of expansion by Marriott Hotels further challenges all top hotel providers. The competition from Startups like OYO; which was rated as one of the top Hotel Management companies to work for in India; and from Apartment Sharing websites like Airbnb will make the competition even more interesting.

The shift in momentum will only benefit the Indian hotel industry and travellers. Hope you liked this quick compilation of the top hospitality companies operating in India.

Exciting times ahead for the Indian hotel industry for sure.