In this post, we have listed the top fast food chains in the world.

The fast food industry isn’t what used to be a century or even two decades ago; fast food chains have gone global big-time, and now control trillions of US dollars in revenue and employs millions of hospitality graduates across the globe.

To be one of the best fast food chains in the world, you need to have healthier options and a diverse menu.

In the past half-century or so, fast food chains have grown in numbers, reach, and revenue across the world because of one simple fact: There has been a greater awareness for healthy food which has led to the appearance of Healthy Fast food chains around the globe.

Without much ado, here are the top 10 fast-food chains in the world. Kindly ignore our liking and numbers as we have not ranked these in any order. I am sure all of the food lovers would rank them differently depending on their taste. So, please feel free to reshuffle them. The list is all yours :).

Established a half-century ago, Subway has made massive strides and now boasts over 33,000 eateries in more than 100 countries worldwide.

Get this: Subway has over 80 stores in Singapore, a country that’s a paltry 300 square miles in size.

Healthy and calorie-conscious consumers have ensured that Subway keeps its great run going around the world.

At Subway you can always expect to eat Fresh. McDonald’s is one of the Biggest Fast Food Chains in the world. Chiming in the second position is burger giant McDonald, trailing Subway by nearly 1000 fewer locations in the world. As of this date, McDonald has over 3,50,00 stores in more than 118 countries worldwide. Over the years, its annual sales have soared to surpass the 29-billion-dollar mark.

It has pioneered the concept of Fast Food.

No list of fast food chains will ever make sense without even a slight mention of McDonald’s.

Established by McDonald’s brothers, Maurice and Richard, in 1940, McDonald’s has transitioned into the biggest fast food chain in America and worldwide.

McDonald’s, however, is famous for its combo meals that include burgers, salads, shakes, desserts, and so forth.

Recently, McDonald’s has also included a lot of healthier options making it one of the healthier fast food chains in the world.

While we all keep bragging about how healthy choices we make in the 21st century, would you believe this study as displayed by Forbes? The study says that fast-food chains used to serve healthier food in the 1980s and the options are unhealthier in recent years. Don’t believe me? Have a look in the below infographic. Coming back to McDonald’s, it also happens to be one of the top hospitality companies in the USA and the world.

Its menu offers an assortment of beef, chicken, and fish burgers, with its locations across the world serving over 68 million people daily. The burger behemoth employs over 420000 people in all its global stores.

Together with McDonald’s, Burger King has grown to become synonymous with burgers in the US.

It has expanded rapidly around the globe as well making it one of the biggest fast food chains in the world.

Catapulted to fame by its Whopper burgers, Burger King (BK) now has more than 14000 restaurants in over 95 countries.

BK was established by two hospitality graduates in Miami, FL, in 1954.

It is highly unlikely that you would not find one of the fast food outlets of this chain in the vicinity. Such is the expanse of this fast-food chain. Certainly one of the biggest.

Sure, KFC needs to be in any Top fast food chains in the world list.

Kentucky Fried Chicken is the 6th largest, and one of the most popular fast food chains in the world for its Southern-style chicken drumsticks and breasts. KFC has become a true international fast food chain, replacing its signature chicken in Malaysia with one that’s marinated in chillies, lemongrass, and lime juice with a crispy breading.

Of its more than 16200 eateries worldwide, its restaurant in Qian Men, China is the biggest, sitting over 300 people at a time.

We all know a lot can happen over a cup of coffee. Starbucks leads the way all across the globe in terms of spreading coffee love. That too in style.

Starbucks is the name-brand in fast food coffee and entries across the globe.

Though the first Starbucks restaurant swung its doors open for customers in 1972, it now has over 24000 shops worldwide.

With over $16 billion in annual revenue and presence in 64 countries, Starbucks isn’t too shabby.

It works in joint ventures in a lot of countries making it one of the most loved coffee shops around the globe.

Papa John’s is one of the most popular fast food pizza chains in the world, with over 3000 locations in the US alone.

Papa John’s claims to offer some of the freshest ingredients and topping on the pizzas.

And true to its hype, the pizza chain has a huge customer base, with most of them making their orders over the phone and online.

It is thus a worthy entrant into our list of biggest fast food chains in the world. ‘Noodles and Company’ is certainly one of the most loved and frequented eatery in the Asian or Chinese fast food chains category.

Since opting for healthier hormone and antibiotic-free chicken to go with their bowls of noodles, Noodles and Company has burgeoned in the number of locations and foot traffic in their eateries.

Although the Pizza Hut Menu Prices have tumbled over the years, the popularity of the chain remains the same.

Not many fast food pizza chains can claim the popularity or revenue that Pizza Hut garners each year.

With over 13300 locations worldwide, Pizza Hut is certainly one of the largest fast food chains in the world.

The allure of its eateries lies in the fact that they offer numerous crust options and a variety of fresh toppings.

It would be a surprise if you haven’t heard of this fast-food chain.

When it comes to Mexican delicacies, Taco Bell is clearly the biggest fast-food chain worldwide.

With their nifty slogan “think out of the bun,” Taco Bell has grown from a local eatery in San Francisco in 1962 to a taco behemoth that rakes in over $2 billion in revenue each year.

With over 6700 restaurants across the globe, Taco Bell is certainly unbeaten in the tex-mex category of fast foods that include burritos, nachos, tacos, and quesadillas.

Taco Bell is a subsidiary of Yum Brands Inc.

Going by the shortened moniker DQ, Dairy Queen is one of the biggest fast food chains in America.

The famous saying at DQ is that they serve ‘Fan Food and not Fast Food’.

It offers both fast-food and soft-serve items on its menu, including burgers, sundaes, milkshakes, hot dogs, and, most recently, salads.

Its most popular item on the menu, however, is the Blizzard frozen treat. Established back in the 1940s, DQ has grown in annual revenue, employees, and eateries.

In total, DQ has over 5700 restaurants worldwide. That’s some number for sure which speaks of the popularity of this extremely popular fast food chain.

Here we go, a quick visit to the list of best fast food chains in the world. We will keep updating the list with more players in the Fast Food industry.

These were our pick for the Top Fast Food Chains in the world. We, of course, gave a few big names a miss just to keep this post crisp and a quick read. So, let’s look at another image which lists the top 20 biggest fast-food chains in the world.

This list created by Businessinsider provides the profitability data of 2017 but still serves the purpose in 2019. Have a look at the below infographic to find them all here. And, while you visit the list, don’t forget to remember the taste of the food they server. Umm, yum isn’t it? 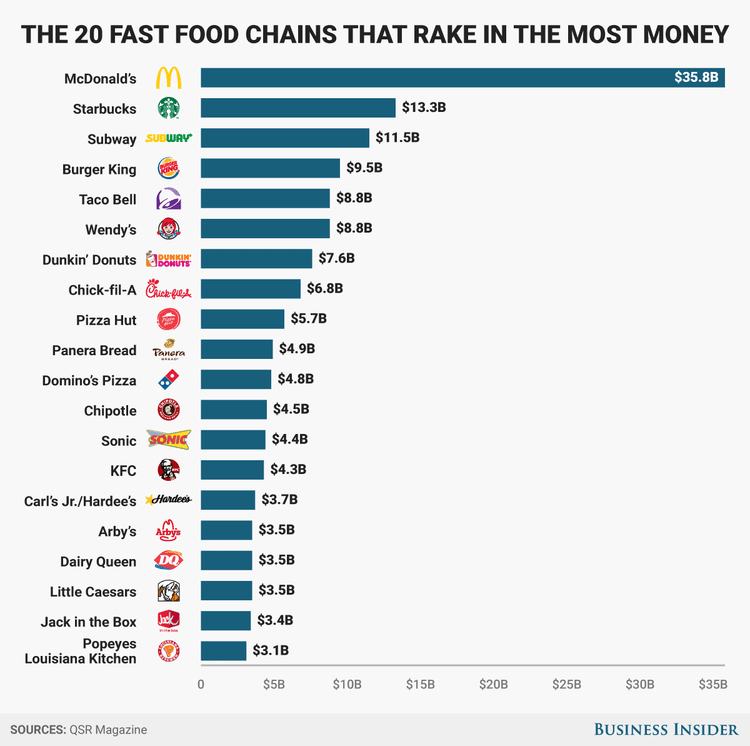