Today, things just happen at the click of a button because technology and other inventions have made our life fast and convenient. Most of the things that we need for basic survival are results of great minds and a gift to human beings through innovation in science and technology.

Innovation in science and technology seems to be a fashion statement these days and used almost everywhere and by every organisation. This can be attributed to the flurry of scientific innovations in recent years.

Well, today we see them in abundance. But behind these inventions are stories of strife, failures, strategy, practice, intellect and much more. We would like to pick the best inventions which are some of the most important innovation in science and technology.

Without any further ado, let’s get started with the amazing inventions and innovations that changed the world of today. 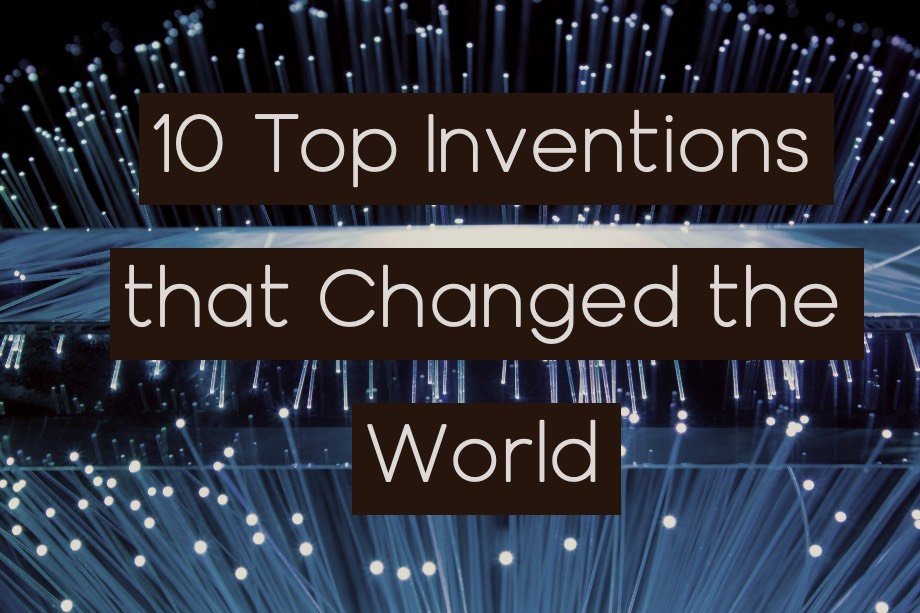 Almost all our transportation facilitator including aeroplanes and even horse carriages depends on this great invention.

Though this invention traces itself back to the BC’s, it is one that transformed human’s regime and elevated civilization in many ways.

The invention of the wheel has led to many other inventions such as propellers, jet engines and wind turbines which were derived from the idea of the wheel moving on an axis.

Looks like a simple idea now but back then the idea revolutionized the process of innovation in science and technology.

Of course, the internet has to be on this list. To be honest, we cannot imagine our lives without the internet.

Our life has received an upgrade with the internet on our tables, in our phones, tabs etc.

Unlike many other innovations in science and technology, the Internet has no single inventor. It has evolved over time with contributions from a lot of intellectual giants and was first developed and experimented in the USA more than 50 years ago.

Internet today has changed human behaviour. We have gone to an extent to even shop and buy our daily groceries through the internet.

Online games, social networking, videos, blogs, e-commerce, net banking and so many other things have become part of our lives as if they perpetually existed.

The Invention of the internet and the advent of the internet in our day-to-day lives is critiqued by a few who believe human ought to be on guard because the internet can rob all of our basic and intellectual capabilities.

As far as we have that clear red line demarcated, we seem to be doing good with the Internet as it seems to be a boon to society and mankind helping the process of sustainable development.

We might argue to pick the telephone over a Smartphone as one of the greatest invention ever because it came before the smartphones.

But, the Smartphone is believed to be a greater invention by many.

While certain features of the telephone were retained by smartphones but carrying information of the world in that tiny electronic case is a huge achievement in itself.

Smart Phones encompassed, Instant communication to anywhere in the world through short messaging service (SMS), Social networking sites, video calling, maps, satellite navigation that would direct us to anywhere we want and a lot more.

Smartphones have integrated itself with another great invention, the camera, and have made it so easy for us to capture high-quality pictures, something which looks simple and easy to digest but was a tough nut to crack and now has become a unique selling point for smartphones.

This great invention by Gutenberg did alter history to a great extent.

Today, we know what history is through documents. Knowledge was passed through generations, writings became a medium and of course, literature was affected the most.

We have books and magazines, which are produced in abundance. Thanks to the efforts of the people who lived back then, that have changed our lives.

Today’s printers and other printing machines have all followed this great invention and have evolved over the years riding high on technological innovation.

Already making big news in our world today. It will continue to assist in monitoring and control of objects.

The benefits and possibilities for use of this technology are endless.

Of course, the growth of this innovation will increase the amount of data that needs to be processed and stored.

Most importantly this innovation has led way to smarter things. We are out of machines. We are getting into the age of sensors. You might have loved the sensor screens being used by Iron Man or in Star Wars.

Well, the imagination is turning into reality.  Internet of things can be a far bigger innovation than anyone realizes.

We are advancing into a stage when a lot will happen through sensory movements.

Exciting and scary, isn’t it?

Robotics is already considered as one of the innovations that will change the world of tomorrow.

It is actually changing the world of today as well. It is a matter of time when domestic help would be a robot.

It would be possible to have a pet which can multitask and speak multiple languages. These highly capable robots with excellent fine motor control and improved sensors will be able to complete many more tasks.

This will affect manufacturing, may open the door to service robots, turn into personal and home robots and may also provide a solution for amputees.

Indeed, we are on the doorstep to a world of limitless possibilities. Few companies have already started using their innovation capital and there is a lot in store in the future.

This is a no brainer. All of us are now quite used to this technology. Thanks to the stellar marketing efforts and a rush by companies to outperform each other.

Gone are the days when local servers were the norm of data storage. The remote servers hosted on the internet have revolutionized the managing and processing of data. Cloud or Cloud computing is the ability to share a pool of common computing resources.

This is a fast-growing area that allows businesses to focus less on infrastructure and more on productivity. Users from across the globe can have access to the same files and workspaces.

Any business looking to make it in the future will likely need to adopt using the cloud for some purposes.

AI and Automation have reimagined how travel and hospitality were perceived. A lot of top technological innovations in hospitality and travel are credited to AI and Cloud computing.

It is believed that the automation of knowledge work would be the most disruptive technological innovation over the next decade.

Once believed to be only possible for humans, the ability to reason and problem-solving has been developed in machines. This means that machines will be able to replace humans for more jobs and tasks than ever before.

How good would it be if you would not need to stop over for refuelling your car?

The car would be refuelled with energy when parked. Laptops and phones would be charged wirelessly (these are already a reality now!)

Yes, it all depends on one of the innovations that will change our world.

Energy storage along with complementary industrial innovations is making this all possible. Improved use of energy of devices and enhanced battery technology will change the possibilities of many technologies.

Advanced materials and nanotechnology will be created and used. Energy storage will make hybrid and electric cars much more viable.

This is certainly another invention that changed the world.

There have been numerous inventions and innovations over the years and scientists, researchers, artists and common people around us have amazed us by innovations which we cherish till date.

We feel indebted to those who invented or discovered fire, electricity, ship, the wheel, Television, phone, iPhone, Computer etc as these are the things which, one way or other, affect our day to day lives.

However, we ignore one of the greatest innovations of all time in our list of great inventions and that is money. Money is undoubtedly an innovation that changed the world.

Money is said to be used first around 3000 BC before which the only mean of selling or buying was barter.

However, values and perceptions being subject to change and with no uniformity in transactions, the barter system still remained the norm for thousands of years after the advent of human civilization.

It is believed that around 3000 BC money came into existence. It allowed the value of goods to be traded rather than the goods themselves, thus making it possible to sell and purchase mass quantities.

This invention quantified value and a price was put on everything. Money could virtually buy everything, and like every invention had both positive and adverse facets tagged to it.

In the current era when epics can be stored in minute chips, money is completely liquid as well and can be carried through hassle-free means like cards, cheques, online banking etc.

This is another innovation or invention that changed everything about human perception.

In 1953, James Watson and Francis Crick discovered DNA while working at Cambridge University.

The duo suggested that the correct model for DNA structure was the double helix model and famously walked into a local pub and exclaimed, “We have found the secret of life.”

Creativity is ubiquitous and the whole point of getting into the discussion is how creativity is embedded into the DNA.

Each one of us is blessed with creativity and there is a pattern to creativity and innovation and we just need to crack the code. A few decades ago, it was not possible to track criminals merely on the basis of fingerprints.

DNA has been notably important to the field of forensic science.

It was the finding of DNA that led to the research which revolutionized finger impression recognition.

While the discovery of DNA has perhaps impacted medicine the most, its contribution to other areas is still similarly significant.

The discovery of DNA has been a significant one in the twentieth century and it will continue to revolutionize medicine, agriculture, forensics, paternity and many other important fields in society in the coming centuries.

This innovation has opened the door to crack all secrets of human life through various research studies and is indeed commendable.

It is exciting, scintillating and terrifying as the world awaits further revelations about the secret world of human life.

Life without these amazing innovations and inventions would definitely be bizarre.

We would be existing like men in the Stone Age, nomadic, documents on paper alone, hardly any communication and what all would we miss.

Technology has enhanced our existence to a great extent.

If fashion is fickle, so is technological innovation. We are living in a world of limitless opportunities. New technologies appear and disappear in the spur of time.

Thousands of innovation steal the limelight every day.

Few of them stay and many disappear like fads of technological innovation.

However, there will be a few innovations that will stay with us with the potential to change the world and change our tomorrow. These innovations will change how we perceive things.

We live in an era full of disruptive innovation. Creativity is bubbling more than ever. We are all part of it. We all contribute in some way or the other. We love few innovations, hate a few, ignore a few, and embrace a few.

8 Key Strategies to Unleash the Entrepreneur in yourself

6 Smart Ways to use SMS for your Hotel Business

7 Ideas to Foster Innovation and Growth in your Business