You must have heard about the apartment-sharing website Airbnb. It has become a disruption in the lodging sector of the hospitality industry in recent years. In this post, we discuss Airbnb vs the hotel industry.

One thing is for sure that Airbnb is disrupting the hospitality market in a big way.

It has been one of the most exciting startups recently. In one of our posts, we have listed a few of the Other Hotel and Travel industry Startups.

In this article, we have tried to take a holistic view while comparing Airbnb to the hotel industry.

Airbnb vs the hotel industry is a trending topic and we have tried to make this post informative and interesting.

So, please read on.

Airbnb Vs the Hotel Industry 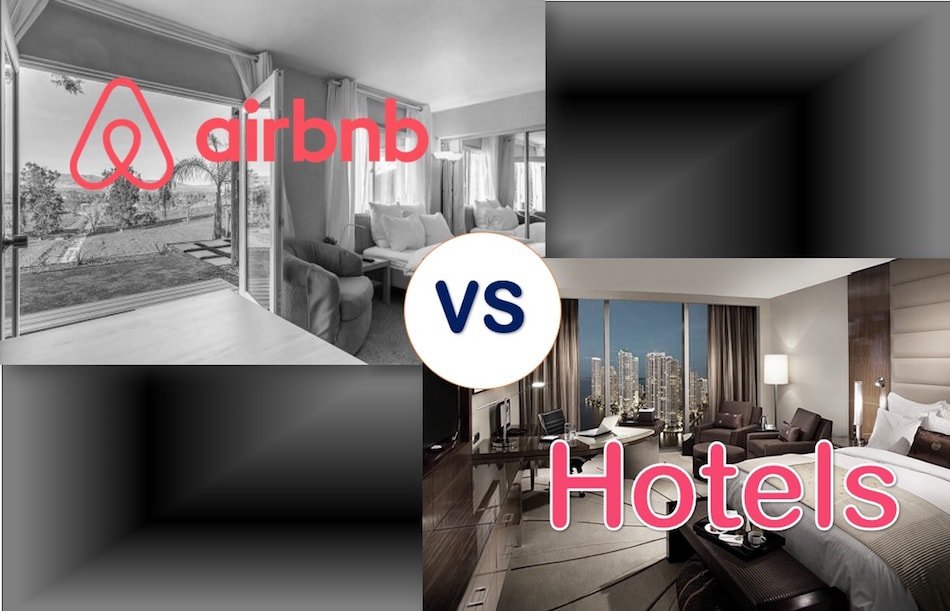 STR, a data research firm, compared key data of Airbnb along with major hotel players in 13 key US and international markets.

As per the data by STR quoted in Business Insider, the Airbnb vs the hotel industry debate might not be that important.

What the firm found was that Airbnb doubled its listings around the worldwide than the major hotel groups combined but they’re not replacing the hotel industry.

Airbnb might not be hurting the hotel industry at all.

First, have a look at the number of hotel rooms vs rooms of Airbnb as per the data. 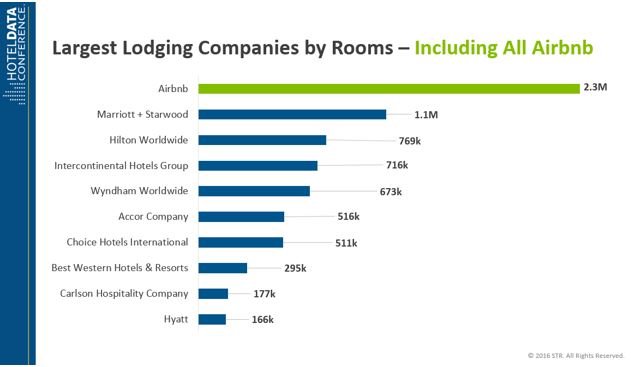 And now have a look at the growth statistics of the hotel industry and Airbnb in the markets in question.

When Airbnb entered the market, it caused many in the hotel industry to become concerned that the home-sharing company would damage the real estate and hospitality industries. However, it appears those concerns are without merit.

As is evident, the growth of the hotel industry has improved in comparison to the Airbnb.

The hotel industry is actually getting a healthy competition by Airbnb which has created a separate market for itself. 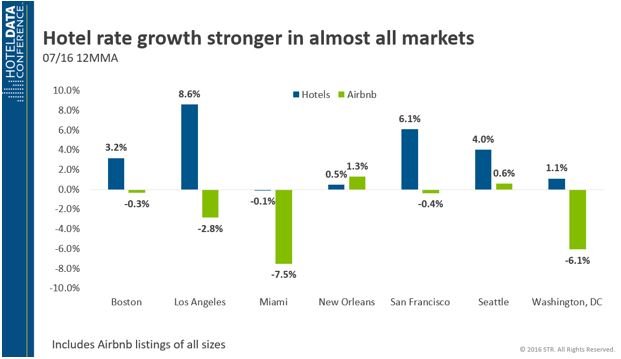 The business model of Airbnb has helped increase the number of travellers and pushed hotels to embrace technology and automation. This helps end-users or customers.

From new innovative technology in the hotel rooms to impressing customers at every touch point; the hotel industry is giving Airbnb a run for the money.

The competition is tough and is healthy. So can we complain?

So, is Airbnb a threat to the hotel industry? At this moment, we don’t think so.

Now moving on the next a more relevant question which allows both Airbnb and the hotel industry to co-exist in a profitable and healthy manner.

Is Airbnb disrupting the Hospitality industry?

When trying to compare hotels to Airbnb, it’s comparing apples to oranges. People who opt to stay in an Airbnb home do so to have a completely different experience.

One can however not argue about the fact that Airbnb comes up as a revolution within the hospitality industry.

It is certainly disrupting the hospitality industry.

Travellers want to intermingle with hosts, be involved with the local community or unable to afford a hotel stay.

On top of that Airbnb provides accommodations not seen with hotels such as whimsical places such as tents and Treehouses and shared spaces.

However, Airbnb still has problems making an impact on occupancy in some areas of the market.

Hotel occupancy is still higher in big markets such as Los Angeles and San Fransisco, which is where the Airbnb began.

The gap is even bigger in international locations such as London and Mexico City. Airbnb may be the stopgap for when hotels are fully booked.

Yes, Airbnb is still taking some markets away from hotels, but not enough to unsettle the traditional lodgings.

Many people feel Airbnb is actually helping with gentrification and impacting housing costs, but it’s not going to take away from the hotel industry anytime in the near future.

Competition is good and apartment-sharing websites like Airbnb will hopefully help the hotel industry grow further and come out stronger.

Critique of Airbnb as a concept

It is one of the most talked-about startups in the hospitality sector. But, it has been in the news for the wrong reasons in the past.

A few years ago, city taxes that were collected for the New York’s hotel’s had remained flat or decreased – and it was thought that Airbnb-The accommodation site and numerous apartment-sharing websites were to blame for the decline.

This has been a trend in several other cities in the USA.

However, there is also a growing concern for authorities who also believe that a lot of listings at Airbnb NYC are illegal rentals. Airbnb however, claims to have taken necessary measures to counter these issues.

Airbnb came up with an agreement with Newark to give some of its sales toward hotel taxes, and it would like to come up with a deal that’s similar to Newark’s with New York and other places across the globe to be tax compliant and responsible organisation.

According to a company statement, they know the community and would love to contribute millions of dollars to the state if they were able to do so.

So, it’s not simple mathematics as far as the competition of Airbnb with Hotels is concerned.

Hotels blame Airbnb of playing with rules and ethics while Airbnb takes pride in creating a community that didn’t exist earlier. The company along with other apartment-sharing websites are redefining the lodging industry trends and travel.

Airbnb vs the Hotel industry debate is set to intensify in the coming months. We will update this space with more information on healthy competition.

A lot of other apartment-sharing websites are following the Airbnb model to add to the worries of the hotel industry.

While New York seems to be affected by the growing prowess of Apartment sharing websites like Airbnb, a lot of other areas seem to be unaffected.

One thing, however, is certain. The customers are winners all the way in this clash of the Titans.

Most Innovative Hotel Concepts In The World

Google for Jobs – The Ultimate Tool for Hospitality Job Seekers

These are the Most Popular Cuisines in the World