Dubai is at the helm of its affairs as far as the expansion of its hospitality industry is concerned. The Hotel sector is booming and so are the other sectors of hospitality. One of the most interesting expansion has been on the side of Theme parks. The new entries are the Bollywood and Hollywood theme parks. The Hollywood Vs Bollywood competition is going to be interesting. While Bollywood Parks Dubai is a theme park dedicated to Bollywood action, the Motiongate theme park in Dubai is inspired by Hollywood.

Hollywood and Bollywood are two of the biggest players in the movie industry globally.

Dubai has been creating a lot of new jobs in the Hotel industry as it gears up for the World Expo 2020 in style and these theme parks are a part of the preparation for the same.

Let’s have a look at how Hollywood and the Bollywood theme parks plan to woo more customers. The battle of Hollywood vs Bollywood is on in Dubai in the form of these theme parks.

The Indian cinema industry is popularly known as Bollywood. It has become extremely popular and like its senior counterpart Hollywood, has crossed national boundaries.

Bollywood Parks in Dubai claims to host the Greatest Bollywood Shows on Earth.

It’s the first Bollywood styled theme park in the world.

Royal palace-inspired domes have been constructed for the new Bollywood theme park, which is located in Dubai.

The move is to bring more visitors to the emirate.

Dubai Park and Resorts (DPR) is in charge of the Bollywood Parks and is labelling it has the area’s biggest “integrated theme park resort”.

The park, which is more than 1.7 million square feet has multiple zones.

Check out the Mumbai Chowk, Royal Plaza and more.

It’s an original park, getting inspiration from the popular Indian movie industry with its simulators, ride, cinemas and Rajmahal Theatre. So, it’s the authentic Bollywood experience on the taking.

Dubai is a city of experiences, entertainment and best in terms of hospitality experience. The city also hosts the  Largest indoor theme park in the world – Worlds of Adventure.

Motiongate Dubai is working with three major Hollywood Studios – Lionsgate, Columbia Pictures and Dreamworks – to create attractions in this Hollywood theme Park such as the simulated settings of Kung Fu Panda, Madagascar and many other attractions developed from 13 popular movies. 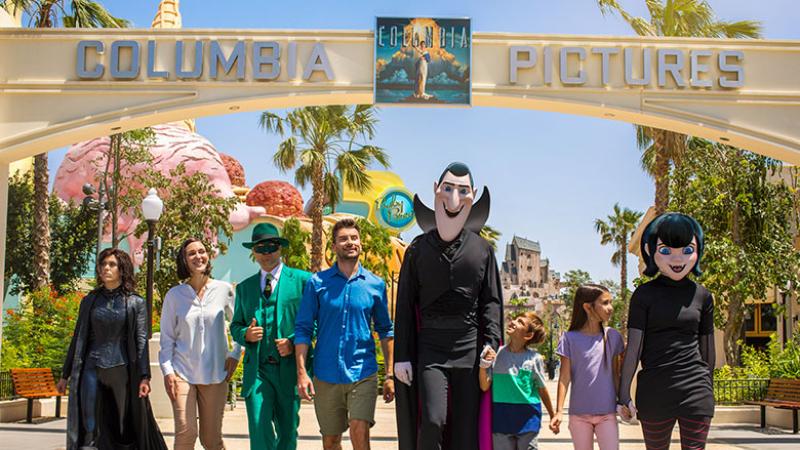 Look out for 5 different zones which have 40 attractive rides.

Worried about the scorching heat in Dubai during summers. Airconditioned attractions are just the icing on the cake.

This theme park ensures a never before Hollywood experience.

The Hollywood vs Bollywood Theme park competition is good for Dubai.

According to tourism authorities, Dubai is set to become a top 10 worldwide destination when it comes to available hotel supply.

Issam Kazim, tourism chief in Dubai, said the benefits are limited if they rely on markets they’re currently using. He said there’s a need to extend their marketing efforts to new locations.

The largest regional group to Dubai came from the Gulf countries with 3.3 million; Saudi visitors were around 1.54 million.

Indian visitors came in at 1.6 million (a rise of 26 per cent) and there were 1.2 million Britons that had visited the country.

With such a huge visitor count from India, a Bollywood styled theme park is going to be a winner for sure.

Kazim said the goal is to focus on 20 markets, not six or seven of them. Bollywood Parks is looking to target visitors in the Dubai area and entice them to stay…not just pass on through.

Bollywood theme park in Dubai does add to the long list of attractions enticing Indians to visit Dubai. The Hollywood vs Bollywood competition makes the competition healthier.

The addition of the two theme parks is just small addition to a huge list of Dubai entertainment venues for people to partake in.

But, one thing is for sure. It’s all going to benefit us the visitors. Won’t you agree?

Enter the OTP which has been send to your e-mail.